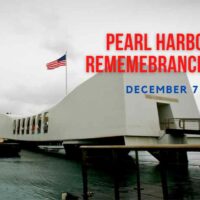 The day marked a turn in the United States’ position regarding involvement in World War II. The Japanese attack damaged several battleships, permanently sinking both the USS Arizona and USS Oklahoma. Still, others capsized, taking crew members with them. One noted ship was the USS Utah. Along with naval vessels, the attack destroyed aircraft, too. As a result, the attack forced the U.S. into a war that had been raging for two years, primarily in Europe.

Organizations across the country honor the memory of Pearl Harbor with tributes; survivors share their stories and join in reunions. Traditionally the Flag of the United States is flown at half-staff until sunset to honor those who lost their lives serving this nation at Pearl Harbor.