Will Not Wearing A Motorcycle Helmet Affect My Florida Personal Injury Claim? 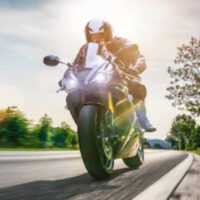 With Florida’s beautiful weather, long stretches of highway, and lack of helmet-laws, it’s no wonder that so many people choose to enjoy the state by motorcycle, and often without helmets. That’s right, Florida is one of the only states that makes wearing a helmet on a motorcycle a personal preference. You cannot be charged, fined, or even given a citation for riding a motorcycle without a helmet in Florida. However, that doesn’t mean you’re totally off the hook: there’s a catch. If you are injured in an accident and bring a lawsuit against the driver, even if the driver is at fault, the fact that you were not wearing a helmet may be used by the defense to avoid responsibility or dramatically reduce your damages award.

Florida is a pure contributory negligence state. This means that if two people are involved in an accident, the court (judge, jury, or both) will assess the facts of the case to determine what percentage of fault each party contributed to causing the accident. If the person suing is found to be more than 50% at fault for their own harm, they cannot recover anything. However, if the person suing is less than 50% responsible, they can recover, and their damages award will be reduced by the percentage of fault they were assigned.

If you have been injured in an accident while not wearing a helmet, the experienced Kissimmee motorcycle accident attorneys at Draper Law Office are ready to fight for you. Having a lawyer will ensure that you get the compensation that you are entitled to, and that your legal right to ride a motorcycle without a helmet isn’t used to let a negligent driver get off scot-free. Call today to schedule your free personal injury consultation.

By Draper Law Office | Posted on May 17, 2021
« Stay fit and stay healthy, enjoy the beauty of a nearby Kissimmee Trail
How Safe Are School Buses? »