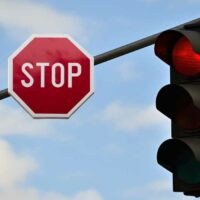 Red lights can be frustrating. At times it seems like traffic lights know you’re getting close and so they change to yellow and then quickly to red just to frustrate you. And of course, it typically happens when you are running late.

Are you someone who races through a yellow light even though you know it’s about to change to red? Running red lights is dangerous and can be deadly. How dangerous? Take a look at the stats below:

Here is some data pulled from 110 red light camera programs:

So, where do we go from here? How do we improve these unfortunate statistics? Bike Walk Central Florida is an organization that focuses on advocacy for bicyclists & pedestrian safety, and Draper law Office believes in what they do. Earlier in 2021, we attended a program they developed called Operation Best Foot Forward, which partners with local law enforcement in educating drivers about crosswalk laws in Florida – which of course sometimes means handing the driver a citation, including 3 points on their license and a $164.00 fine.

How are some communities combating the dangers of red-light running? Along with traffic laws and education-based outreach, some communities have put in place red light cameras. Red light cameras are a form of automated enforcement that are intended to reduce the number of red-light running incidents because of the threat of receiving a traffic violation and costly tickets, but the stats seem to show that they are more of a revenue stream for the local government than a driving behavior modifier.

So, let’s keep it simple – we all need to Slow down and never drive while distracted in any way. Speeding is dangerous and contributes to red-light running.
Look out for others and go back to the basics of driving safely. Look right before turning on green and look both ways before entering an intersection.

Stop on red. Make a complete stop at all traffic signals. It’s a matter of life and death.

At Draper Law Office we feel that a single injury or death caused by a red-light runner is too many. If you or a loved one has been injured because of red light runner we encourage you to not go it alone. Hire an experienced and integrity-based attorney to protect your rights and to help you secure any finances that might be due because of the negligence of a red light runner or similar. Call Draper Law at 407-846-0075 or visit DraperLawOffice.com today.