What To Know About Wrong-Way Accidents 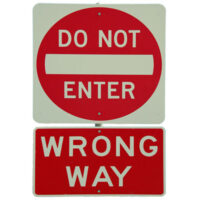 In a perfect world, all drivers would travel in the right direction. They would not be going the wrong way on a busy street such as a freeway. Unfortunately, though, many drivers are negligent while on the roadways. They are not always paying attention to where they are going,

This is a serious issue. When two vehicles are coming at each other at high speeds, the results can be deadly. Wrong-way crashes account for just 3% of accidents on high-speed divided highways, but they are much more likely to result in fatal accidents than are other types of highway accidents. That’s because most of these accidents are head-on crashes.

Going in the wrong direction is hardly ever an accident. There are many reasons why wrong-way accidents happen, including the following:

Wrong-way accidents can cause serious accidents. They often lead to catastrophic injuries and death.

If you have been a victim, the Kissimmee auto accident lawyers at Draper Law Office can help. Contact us to see what you are entitled to receive. To learn more, call our office at (407) 743-6628 or fill out the online form.

By Draper Law Office | Posted on November 4, 2022
« Train, Vehicle Collide In Kissimmee, Killing 1
Back Injuries In A Car Accident »