Veterans Day is November 11, say thank you to a veteran 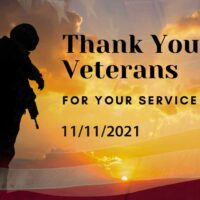 Veterans Day on November 11th honors military veterans who served in the United States Armed Forces. The federal holiday coincides with Armistice Day and Remembrance Day, which marks World War I. These observances reflect the end of significant hostilities at the 11th hour on the 11th day of the 11th month of 1918 when the Armistice with Germany took effect. Initially, the United States observed Armistice Day as well. However, it evolved into the current Veterans Day in 1954.

Veterans Day is sometimes confused with Memorial Day or Armed Forces Day, but they are very different remembrances. Veterans Day celebrates all United States military veterans. Memorial Day is set aside for remembering the men and women who died while serving. Additionally, Armed Forces Day recognizes the men and women currently serving in the United States military.

Since Veterans Day is a federally designated holiday, many businesses and schools close for the day. Additionally, many local, state, and federal organizations host Veterans Day ceremonies.

On June 1, 1954, Congress vote to replace “Armistice” with “Veterans,” and it has been known as Veterans Day since.

Initially, the country observed Veterans Day on November 11th. However, starting in 1971, the Uniform Monday Holiday Act required the federal holiday to be moved. Congress scheduled the observance for the fourth Monday of October. In 1978, Congress moved it back to its original celebration on November 11th.

Attend a ceremony and take a veteran you know out for a meal. Organize a veteran appreciation luncheon at your work or in your community. The point is… say thank you to a veteran. They dedicated themselves to ensuring that our free nation remains free.

Thank a veteran and use #VeteransDay to post on social media.