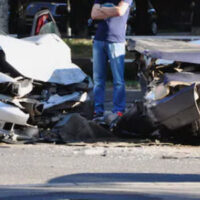 Deputies from the Florida State Highway Patrol reported earlier this week that a 54-year-old Kissimmee man, who was riding as the front-seat passenger in a Ford Focus, died as the result of a tragic head-on collision with a Kia Forte. The accident took place in Seminole County, on state road 436 around 5:00 p.m.

Deputies reported that a 59-year-old Tampa man was driving the Ford Focus carrying the passenger who was killed. According to witness statements, the man was driving the Ford Focus westbound on state road 436 when he suddenly crossed the median and entered the east-bound lanes, where he quickly crashed head-on into a Kia Forte, being driven by a 19-year-old woman. Both drivers are being treated for injuries, however, the injuries reportedly (and miraculously) are not life threatening.

Deputies have not yet determined what caused the driver of the Ford Focus to cross the median and enter the opposite lanes. An investigation into the accident remains open and ongoing.

Why Head-On Collisions Are So Deadly

If you have been involved in a head-on collision that was not your fault, it was almost certainly someone else’s. Head-on collisions rarely happen in the absence of negligence. While sometimes inclement weather can be to blame, exercising reasonable care and adapting to icy roads by reducing speed and exercising appropriate precautions should still serve to avoid head-on collisions. For this reason, it is safe to assume that if a head-on collision has occurred, it’s because someone was failing to act carefully.

The most common causes of head-on collisions include distracted driving, fatigued driving, falling asleep behind the wheel, and driving under the influence of alcohol, illegal substances, or prescription drugs.

If you’ve been injured in a central Florida car accident that was not your fault, the experienced Kissimmee personal injury attorneys at Draper Law Office are here to help. Contact Draper Law Office now to schedule a free consultation and find out how we can help you get the justice and compensation that you deserve.

By Draper Law Office | Posted on May 5, 2021
« One dead, Four injured in I-4 crash in Orlando involving semi-truck, police say
May is Motorcycle Safety Awareness Month, Let’s Share the Road – Safely! »